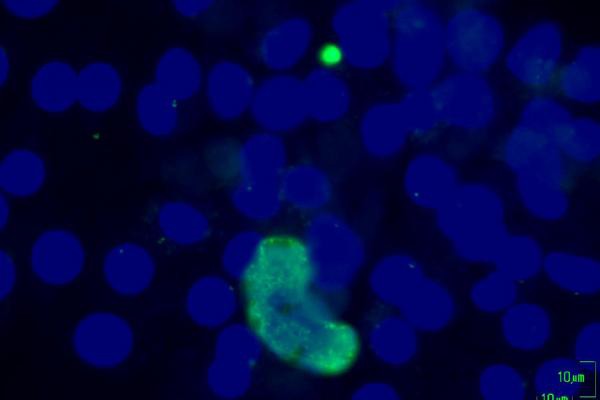 A humane method for malaria research

The Biomedical Primate Research Centre (BPRC) in Rijswijk conducts research into a humane method of testing the activity of medicines used against dormant malaria parasites present in the liver. Instead of using hundreds of Rhesus monkeys, liver cells are now used for this purpose.

More than 70 million people become infected with vivax-type malaria each year. This form of malaria is very hard to treat because the parasite can reside in the liver in a dormant form. Dormant parasites can awaken after a period ranging from a few weeks up to several years, and cause another bout of malaria. A medicine exists, but it has severe side-effects and the parasite can develop resistance. As a result, new medicines are desperately needed.

Until recently, research into potential medicines to treat this type of malaria was technically impossible. For this reason, research was focused on a closely related parasite that occurs in monkeys. This research was carried out by infecting rhesus monkeys with the malaria parasite and then trying to treat them, allowing scientists to conduct research into new drug treatments.

In order to reduce the use of laboratory animals, researchers have set up a system in which liver cells can be cultured. The cells are then infected with parasites obtained from mosquitoes. Using a special microscope, the researchers can see if a specific medicine works against the dormant parasites. Several medicines can be tested simultaneously using this method.

This method has allowed the number of animals used per test to be reduced to one, instead of the hundreds that used to be used. This one monkey is now briefly infected with malaria, a blood sample is taken which is used to infect mosquitoes, and the monkey is then cured.

Thanks to this test, a new medicine has been developed that is capable of killing the dormant parasites. This medicine will now be subjected to further tests to see if it can eventually be used in a clinical setting. The culture system is undergoing further refinement to allow more medicines to be analysed per experiment. Moreover, work is being done to try to develop an alternative for the one monkey that is still needed for the test.