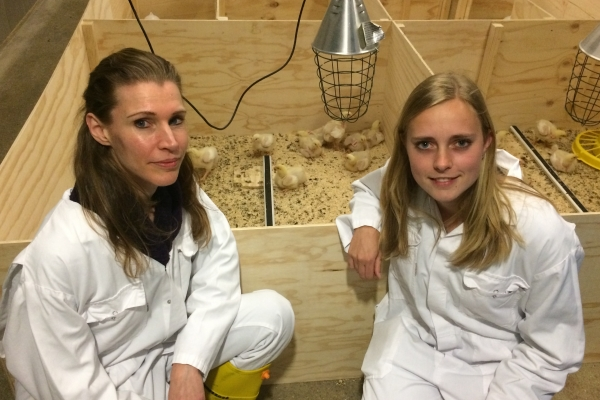 In 2016 the Utrecht University and UMC Utrecht 3R’s Stimulus Fund selected 5 research proposals for grants. One of them was a study investigating methods to improve welfare for broiler chickens used for experiments in research on infectious diseases. The chickens are kept in isolators, group housing units of glass and steal cages with rubber gloves.

What can be done to improve these animals’ welfare?

The research proposal was submitted by Francisca Velkers, assistant professor in the Veterinary Medicine faculty, Department of Farm Animal Health, in cooperation with Mieke Matthijs and Rebecca Nordquist. Intern Anne Littooij (student of Applied Biology at HAS Hogeschool) conducted many of the experiments. We spoke with Francisca and Anne.

What do you want to achieve with this research?

Francisca: “We wanted to understand cage enrichment for chickens in isolators better. By law, chickens used in experiments have to have perches and substrate for foraging. The idea is that they like to sit on perches, but we previously thought that broiler chickens don’t do that very often. Litter is also nice for them, but it can affect some experiments. On the other hand, if their welfare is not very good it call also negatively affects the experiment. So there were good reasons to look into this.

How did you get started?

Anne: “I began by looking at existing research on cage enrichment for chickens in isolators – and found that there is very little. Then we visited some other institutes in the country where they work with isolators. We have joined with them and formed a network group aiming at developing a plan for how to treat chickens in isolators. We spoke with experts in animal behaviour, with the NVWA, and with the isolator manufacturer.”

What problems did you encounter along the way?

Francisca: “To improve laboratory animal welfare, you have to do animal experiments. Otherwise you don’t know what they like and don’t like. On the recommendation of the Animal Ethics Committee in Utrecht, we started with research in normal chicken pens to test their preferences. The animals feel at home in this environment and it’s easier to observe and film them. The fact that broilers are involved makes it extra complex. They’re much less active than laying hens, so differences in behaviour are more difficult to identify.”

Anne: “I had put a red plastic tube in the pen to see how they would react to a strange object, but they didn’t react at all, so it’s hard to measure whether they’re reacting more or less. Luckily we ultimately we saw differences in other tests and could draw some conclusions.”

Chickens are maybe not your everyday lab animals.

Francisca: “Laying hens are used often in welfare orientated research, and broilers not so much. I do a lot of research on infectious diseases, including diseases in chickens. The outcome in this kind of research is much clearer: either an animal becomes infected or it doesn’t. But we still know very little about what goes on in their little heads, so we’re looking at how they behave. We film them to see how much time they spend with their enrichment. We also do motivation tests, on the recommendation of Yvonne van Zeeland, who has a lot of experience studying parrots. You measure how much effort an animal is willing to make to get to a given spot where the enrichment is, to know how much it wants to be there.”

Anne: “The chickens have to jump onto a raised platform to get to the perches, and we can vary the height of it. How much effort is it willing to make to get to that perch? We compare the perch with other rewards, such as food or the company of other chickens, or no reward. We expect that the animals will do the most for food and for social contact. If there’s no reward, they won’t make much of an effort. And the amount of effort they want to make to reach the perch is probably somewhere in the middle.”

Francisca: “Once this research method is working well, then we can compare many different kinds of perches and other kinds of cage enrichment.”

Anne: “At first the perches were made of smooth plastic. But chickens have relatively heavy bodies and their feet aren’t very strong, so it’s not easy for them to sit very firmly. We wrapped a bandage around one perch, and that perch was very popular straight away. We talked about this with the manufacturer, and now they make slip-proof perches for us.”

Francisca: “It’s a great working relationship. If we need something new, they make it and bring it to us. Anything that works well will probably be put into production, and that has an impact on other animals too.”

Why is the 3R’s Stimulus Fund important for you?

Francisca: “Most funds are oriented towards diseases, and won’t readily award grants for studying ways to improve lab animal welfare. It wasn’t a huge amount, but we were able to make a start. We were able to buy chickens, feed and cameras. The cooperating institutes will make the isolators available. Others are helping by sharing their ideas about certain issues with us. And we may be able to continue the research with money from our own department.”

What do you think your research will yield?

Francisca: “We’re going to present our conclusions at congresses and write articles about it. We’re also making a report for all the parties involved. People in the field still think that chickens don’t care much about perches. If it turns out that the key is in the material, and if a new material gets used in production, we’ll have gained a lot. I also think our methods can be adapted for research with laying hens. That’s also what I see as the goal of the fund: to improve the lives of as many lab animals as possible.”

What do you recommend your colleagues do?

Francisca: “Above all, submit send in your ideas! Think outside the main questions of your research. What can you do to improve the lives of lab animals, or the outcomes of animal experiments? Usually there is neither time nor money available for this kind of research, but this fund makes it possible. Seize this opportunity.”