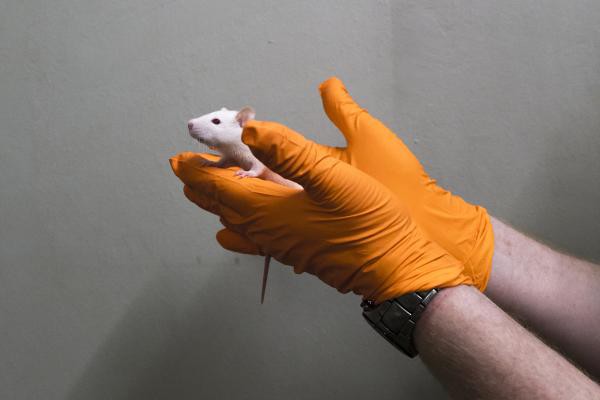 Laboratory rodents given a second chance

Utrecht University and the UMC Utrecht are working with animal welfare organisations to rehome small laboratory animals, such as mice and rats.

Most of these animals were bred to be laboratory animals, but were not actually used in an experiment. Usually small rodents are killed after being used for an experiment, so that the effects of the experiment on their organs can be studied.

People often work hard to rehome larger lab animals like dogs and cats, but this is rarely done for smaller animals. The Animal Welfare Body (AWB) Utrecht, an organisation that supervises the welfare of the laboratory animals for both institutions, is aiming to change this. After asking for recommendations from various animal-welfare organisations, they have entered into a partnership with a shelter in The Hague called Het Knagertje. The Dutch Society for the Protection of Animals (Dierenbescherming), Animal Rights, and the Stichting Hulp en Herplaatsing Huisdieren were happy to brainstorm with the AWB and work with them on finding a solution in different ways. A pilot project was started in October 2019, and in a half year, they have found new homes for 156 mice and 8 rats.

Wim de Leeuw, head of the Animal Welfare Body, says: “We had to get over a fewhurdles, such as recruiting and registering adopters, but our partners helped us get that started. One positive side effect is that it’s made everyone involved in breeding and using laboratory animals more aware of the need to keep as few surplus animals as possible. People sometimes breed a few extra animals, for example because they don’t know exactly how many animals will be born with the traits that may be needed for a particular experiment, such as sex. But sometimes you can make those margins even smaller.”

Not an “impulse buy”

Since the initiators were concerned that people who are unable to take proper care of an animal could sign up to adopt one on impulse, Het Knagertje conducts an in-depth conversation with every prospective adopter. The animals’ welfare is also considered in other ways. For example, small groups of animals who already know each other are kept together as often as possible. Geertje Krechting, owner of Het Knagertje, says, “Anyone wanting to adopt a rodent has to learn how to house and take care of them first. We absolutely do not want people adopting a rodent on impulse, so we charge a small fee for taking one on. The adopters also have to be prepared to pay additional costs. The animals need a roomy cage, and enough suitable materials to play with and to hide in. If they’re sick they need to see a vet, like any other pet, and the new owner will have to pay those fees. Another requirement of course is that no cats or dogs are allowed to be in the same room with them. That’s too stressful for them.”

De Leeuw hopes that the initiative will be an inspiration to many others. “We’re taking our story to national and international congresses to talk with colleagues about the results. Some of them think that large numbers of rodents will never all be rehomed and that’s quite possible, but so far it’s gone well. We’ve rehomed over a hundred animals in a half year, so we have hope.” Soon the Dutch Society for the Protection of Animals will publicise the rehoming initiative on its website Ik-Zoek-Baas.