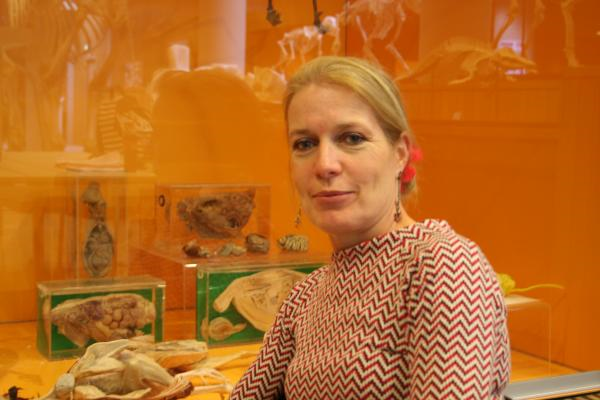 Claudia Wolschrijn, an anatomist with the faculty of Veterinary Medicine at Utrecht University, was awarded a grant from the 3R’s Stimulus Fund for her research on making visible the air sacs in prepared birds. Here she talks about the goal of the research and how the research is progressing.

What does your research entail?

We’re working on reducing the use of laboratory animals in education, and one way we’re doing this is by making plastinates – animals or sections of them prepared in a special way. Veterinary students can study a plastinated animal and see what it looks like from inside in 3D. Formerly, every group of students needed a new dead animal, but the plastinates last for years. The animals we plastinate have been either euthanised after an experiment or donated through the Animal Donor Codicil of the Proefdiervrij organisation.

Birds have a remarkable structure. They don’t have a diaphragm; their lungs are next to the oviduct and they also have air sacs. It’s all hard for the students to imagine, so we plastinate birds like chickens. But there’s a problem with these air sacs; the air in them keeps them under pressure. If you cut into them, the pressure from the surrounding organs immediately empties them. But you don’t want those air sacs to disappear in the plastinate. We managed to fill the hollows in the air sacs with yellow latex, but that turns opaque so the students are just looking at a yellow blob and they can’t see which organs are behind them. That’s the problem we’re trying to solve.

How far along are you in your research?

It’s still early days. We had a brainstorming session about possible ways to plastinate the air sac better. We’ve tried out a few ideas, but we haven’t yet got the results we were hoping for. We were able to make the air sac stronger and put in a kind of flap so you can see through it in a few places, which is better, but not ideal. A few other test models are still in the process of being plastinated, which takes a few months altogether. We’re waiting to see how successful those are.

Why is this so important that it requires specialised research?

A bird needing to be examined or treated by a veterinarian has skin and feathers on the outside. The vet needs to have a 3D mental picture of how the inside looks. Textbooks have illustrations and descriptions, but providing a 3D plastinate completes the picture. We hope that this will help the students to remember what they’ve learned better, and even that it teaches them to convert other pictures to 3D in their heads. Precisely because this is so important, students are still given an animal to dissect, but we’re trying to get away from that.

Do veterinary graduates have a lot do to with birds?

It depends on the direction they choose. Students who opt for farm animals can specialise in poultry. Vets who work with pets also get canaries, parakeets and parrots in their clinical practice, so you certainly do need to know about birds.

What does the grant from the 3Rs Stimulus Fund mean for this research?

I had been thinking about reducing the number of chickens used in education, after other kinds of animals, for a long time. The call for proposals was a reason to really sit down together as a group and think about it. You can’t easily say this study is going to work out fine. It’s mainly feeling our way along, seeing what works and what doesn’t.

We’re here plastinating something every day: a cat, a dog, a pig, or a cow. It’s really busy here. You can’t prioritise a plan that’s less likely to succeed – you need all the time and money you have. The grant helped us to take that step and say “Now we’ll do a pilot with the chicken air sacs in between work on other animals, even if the outcome is uncertain”. We just have to wait and see if we’ve found a good method, but if we do find one it will be a huge improvement. If the grant hadn’t come through, it would have remained one of those ideas that keeps gnawing at you.

On the 3Rs-Centre Utrecht Life Sciences he explains why a good experimental design is essential, and which points of attention regarding study quality are most important in the field of reproducible preclinical biomedical research. he also tells how his work contributes to the 3Rs: Replacement, Reduction and Refinement.